Azerbaijan GP: Verstappen quickest in FP2 before crashing out 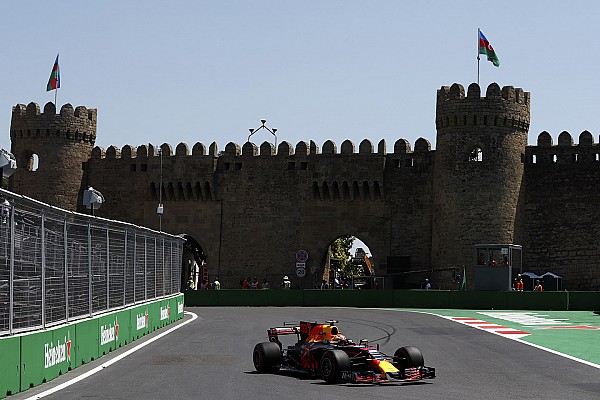 Red Bull Racing driver Max Verstappen completed a Friday clean sweep by topping an error-laden FP2 at Formula 1’s Azerbaijan Grand Prix, a session he himself capped off with a last-second crash.

Verstappen led most of the 90-minute session and wound up heading a tightly-knit top four at the chequered flag, with Mercedes driver Valtteri Bottas, teammate Daniel Ricciardo and Ferrari’s Kimi Raikkonen all within 0.127s.

However, Verstappen went into the barriers at Turn 1 in the dying minutes of practice, attempting to make the run-off area and losing control of his RB13.

Championship leader Sebastian Vettel was not far off teammate Raikkonen in fifth, while Lewis Hamilton, Vettel’s nearest rival in the title fight, could only muster 10th, his best lap recorded on softs early on.

The Baku street circuit had caught out a fair few drivers in the earlier Friday session, but yellow flags were almost a permanent feature in FP2, with almost all competitors either making ample use of the run-off areas or brushing against the barriers.

The soft was again the tyre compound of choice early on in the session, and Verstappen, picking up where he left off in FP1, swiftly put in a new weekend benchmark of 1m44.288s.

His subsequent laptime gains put him in the 1m43s margin and he ended his first run with a best lap of 1m43.894s.

None of the Dutchman’s rivals had even surpassed his FP1 time by that point, although teammate Ricciardo soon improved to 0.220s off Verstappen, reinstating the Red Bull 1-2 out front.

Bottas, who had languished down the order after the run on softs, was the first driver to bolt on a set of supersofts half an hour into FP2, but it was Ferrari’s Raikkonen who disrupted Verstappen’s dominance with his first proper effort on the compound.

Vettel went a tenth quicker than his teammate shortly afterwards, only for Verstappen to retake the spot a sole representative lap on supersofts, lowering the weekend’s benchmark to 1m43.362s.

The supersoft runs were interrupted at the halfway point of FP2 when the twisty Turn 8 claimed its second F1 car of the day, as the Renault of Jolyon Palmer ground to a halt in the barriers with a broken right-front suspension.

The session was restarted after 10 minutes of clean-up, but while many drivers carried on with supersoft runs, Verstappen’s lap would remain unmatched.

At the flag, the top five wound up well clear of the chasing pack, which was led by Williams rookie Lance Stroll – who outpaced his 11th-placed teammate Felipe Massa by half a second.

Daniil Kvyat was the lead Toro Rosso in eighth, splitting the two Force India cars of Sergio Perez and Esteban Ocon, despite having triggered a brief virtual safety car in the first half of the session, as he put debris on track from barrier contact at the sharp right-hander Turn 15.

McLaren’s Fernando Alonso had made an early cameo at the sharp end of the timesheets, running second behind Verstappen, but was eventually shuffled out of the top 10.

His session then came to a premature end with half an hour left on the clock, as he pulled over with smoke bellowing out of his car and radioed “engine, engine”.

While most drivers had issues of some kind in the session, Haas F1 driver Romain Grosjean endured a particularly troubled time.

The Frenchman avoided crashing but went off on several occasions at Turn 3 and Turn 8 and was constantly voicing his frustration over a perceived brake problem on the team radio. He finished FP2 last, 4.4s off the pace.