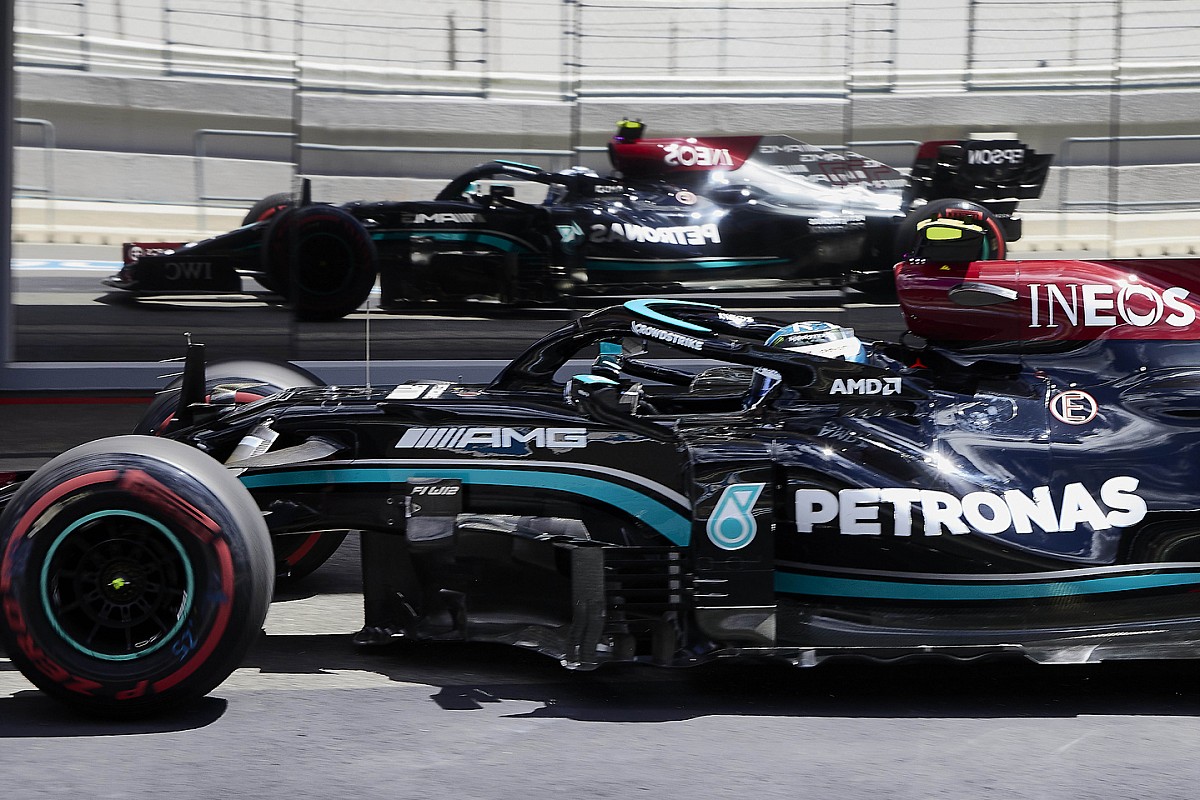 Bottas will start ahead of Mercedes teammate Lewis Hamilton and Red Bull’s Max Verstappen after the one-hour qualifying session, which is split into three segments with five cars each being knocked out in Q1 and Q2 before the top-10 shootout of Q3.

What happened in Q1?

In the first session, when all cars were on track together, Ferrari’s Carlos Sainz set the initial P1 time on soft tyres at 1m19.480s. Surprisingly, neither Bottas nor Verstappen could beat it – by 0.008s and 0.010s respectively – while Hamilton had a big slide at Turn 1, losing his lap of 1m18.726s which would have been fastest at the time.

In the closing moments, McLaren’s Lando Norris grabbed P1 on 1m18.794s until Bottas wrested top spot away with a lap of 1m18.722s. Hamilton ran again, and jumped up to third.

Knocked out at the first hurdle were McLaren’s Daniel Ricciardo, after a “messy” end to his fastest lap, Aston Martin’s Lance Stroll, Nicholas Latifi (Williams) and the Haas duo of Mick Schumacher and Nikita Mazepin.

What happened in Q2?

In Q2, the pole position-hunting protagonists all ran on the medium tyre – Sainz again setting the early bar at 1m19.560s, before teammate Charles Leclerc pipped him.

Verstappen lowered P1 to 1m19.099s, before Bottas set 1m18.458s and Hamilton set a stonking 1m17.968s – almost half a second quicker than everyone. Verstappen fell back to fifth, behind soft runners Norris and Esteban Ocon (Alpine).

Knocked out at this point were George Russell (Williams – who missed out on a Q3 spot by 0.057s), Antonio Giovinazzi (Alfa Romeo), Fernando Alonso (Alpine), Yuki Tsunoda (AlphaTauri) and the second Alfa of Kimi Raikkonen.

What happened in Q3?

In the top-10 shootout, Bottas set the benchmark on 1m18.348s after the first runs, 0.007s ahead of Hamilton. Perez was third quickest, as Verstappen had his first lap deleted for exceeding track limits after he had a huge slide at Turn 4. His 1m18.209s would have been enough for pole, while the Mercs believed that they were faster on the mediums rather than the softs.

On the final runs, Bottas and Hamilton went for new mediums, while Verstappen and the rest went for fresh softs. Verstappen only managed third place, 0.398s off the Mercs, after having to pass Norris on his crucial lap.

Neither Bottas nor Hamilton improved on mediums, but they locked out the front row anyway.

Mercedes was "absolutely desperate" to perform in British GP

Wolff: Hamilton is the opposite of a dirty F1 driver