TRENDING
WHAT'S HOT
Renault set to postpone driver line-up decision
Insider Debates: Who Wins The US Open
previous
Ill Stroll unable to drive because “he couldn’t get off the toilet”
random
next
Brawn hopes 2026 rules will tempt Honda back to F1
0 comments

Hamilton “humbled” to be honoured by Schumacher’s family 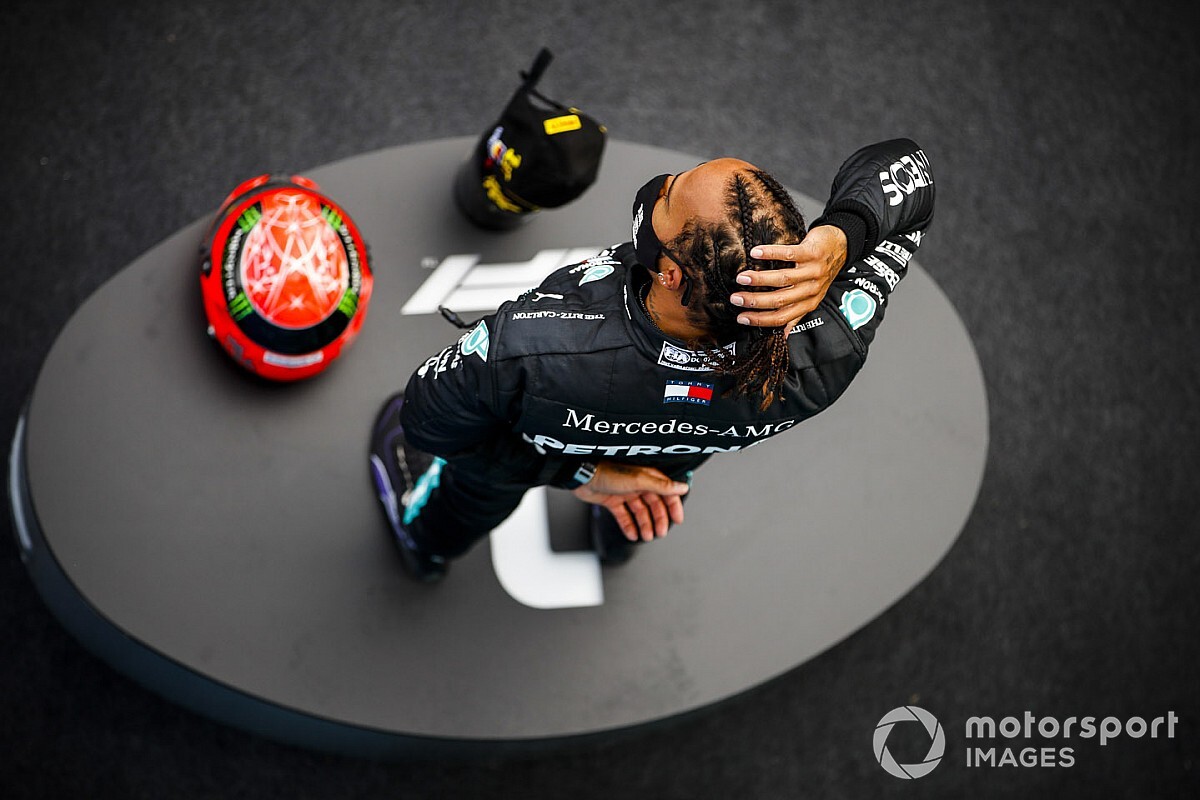 Hamilton scored the 91st win of his F1 career at the Nurburgring to move level with Schumacher’s victory tally, ending the German’s spell as the sole record holder that dated back to the 2001 Belgian Grand Prix.

To mark the achievement, Hamilton was presented with one of Schumacher’s helmets from his final season in F1 at Mercedes by the seven-time world champion’s son, Mick. Hamilton and Schumacher Jr shared a few words during the presentation, and Hamilton admitted he would take time to get used to holding such a place in F1 history.

Asked about the presentation by Schumacher Jr., Hamilton said that he felt touched to have another to add to his collection.

“I actually already have one of Michael’s helmets,” said Hamilton. “One of the really, really special moments for me, in Abu Dhabi 2012, I went over to the Mercedes hospitality, and met with Michael, and we exchanged helmets.

“That, for me, was a moment that I’ll never forget, to stand with someone that I grew up watching on TV, and having the honour of exchanging jerseys or helmets, it’s what us sportsmen do, and it’s the highest sign of respect that you can really show. To have the legend of the sport do that with me was really special.

“Having his family honour me today, I’m just incredibly humbled. His son is such a great, bright talent, and just a really genuine human being. Michael has obviously raised a great man in him, and I look forward to seeing how his career will look moving forwards.

“Now I have two special helmets from Michael in my small living room.”

Hamilton had largely dismissed questions surrounding the record in the lead-up to the race weekend, but acknowledged after the race that this victory stood out from others.

“It’s definitely not just another win,” added Hamilton. “Over this past hour or so, I’ve really tried to contemplate and realise what it is that we’ve done, and what I’ve been able to achieve.

“I would say for the next couple of days, that’s where my mind is going to be at. It’s hard to find the right words and to be able to compute exactly.

“It definitely is a special one. I called my dad and [step-mum] Linda, and spoke to them. Definitely a lot of emotions today.”