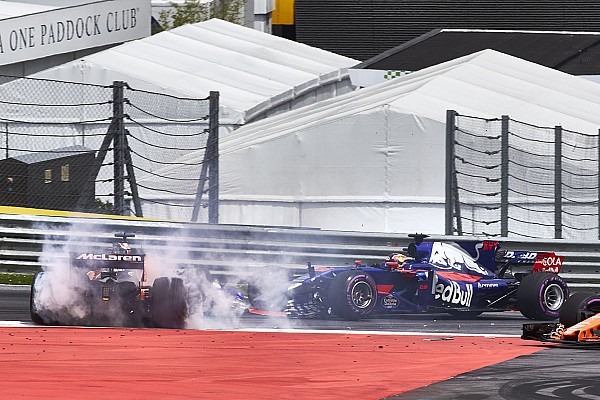 Kvyat was demoted from the main Red Bull team to Toro Rosso last year, following a Russian GP where he twice collided with Ferrari’s Sebastian Vettel on the opening lap.

He also had two major first-lap incidents in 2017, eliminating McLaren’s Fernando Alonso and Red Bull’s Max Verstappen at Turn 1 in Austria and colliding with teammate Carlos Sainz at Becketts in the British GP.

“Sometimes he was too aggressive at the beginning of the race,” Tost told the official Formula 1 website.

“The first corner was his weak point. He wanted too much in the first 100 metres – success by any means!

“That puts you under pressure – unnecessary pressure – and that never works.”

Considerably outscored by fellow Toro Rosso driver Sainz since the demotion, Kvyat was dropped from the Red Bull programme in the closing stages of the 2017 campaign.

He is viewed as a contender, but not the favourite, for the sole remaining seat on the 2018 F1 grid, with the Grove-based Williams team.

Despite his outfit having released the Russian, Tost said that Kvyat was deserving of “another chance” in F1.

“I am still convinced that Daniil has a very high natural speed. He was sometimes even faster than Daniel Riccardo [at Red Bull], but somehow last year and this year he couldn’t show the potential that is within him.

“He was involved in many incidents – but in his defence I also have to say that he had many reliability issues and that didn’t help build up confidence.

“Being the victim of too many incidents killed the performance he would have been able to show.

“Maybe a short break – to get organised again – and probably we will see Daniil back at his usual performance level with another team.”

Having replaced Kvyat and Sainz – the latter loaned to Renault – with rookies Pierre Gasly and Brendon Hartley, Toro Rosso ended 2017 with a completely different line-up to the one it had at the start of the year – which Tost admitted was “hard to swallow”.

The team suffered a late-season disappointment when it missed out on sixth place in the constructors’ championship, with Renault edging ahead in the Abu Dhabi finale.

“We see from other teams that to be successful a certain proportion of stability is crucial,” Tost said.

“This is a luxury we hardly ever had – particularly not this season. To change two drivers during a season is hard to swallow, as it has a big impact on the performance of the team.”