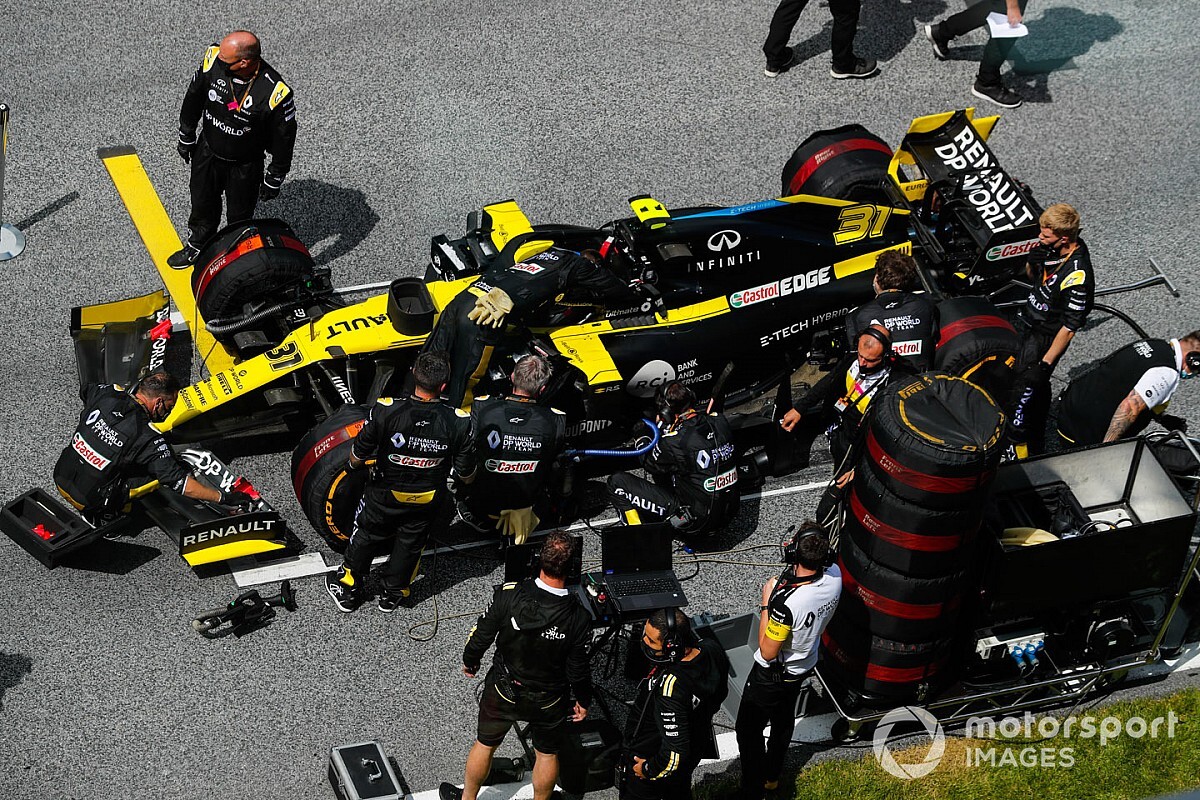 Ocon made his F1 comeback with Renault in 2020 after a year on the sidelines as a Mercedes test and reserve driver.

And with it taking him some time to get adjusted again to the performance demands of F1, and adapt to a new car, Ocon found himself unable to deliver what he felt he was capable of.

But any doubts about his potential faded away after a breakthrough at the Sakhir Grand Prix, when the Frenchman finished second to give Renault its third podium finish of the season.

Despite some tough times and hype surrounding incoming new teammate Fernando Alonso, Ocon said that he never felt under pressure from his team to deliver – because the messages from management were so encouraging.

“I didn’t feel the pressure on, of having to make a result or having to make an incredible race or something like that,” said Ocon about whether he felt the need to deliver something special in the build up to that Sakhir podium.

“I had a chat with Cyril just before the race and Cyril, even in tough moments, was always very supportive of me and very positive. He was always giving me good advice, and that is good when it comes from the boss just before you jump in the car. It means you’re relaxed, and you’re confident.”

Ocon said the message from Abiteboul before the Sakhir race was that, despite starting 11th on a weekend where the team had expected to be super fast, everything was still possible.

“We didn’t have a great qualifying, but he came and he said: ‘Look, you know, it’s going to be an interesting race, and there’s a cool strategy to come up with. So you are going to have a strong one, you know. Take your time, it’s going to come. Good luck’. That’s all he said, but that was really good.

“So I didn’t feel the pressure. But obviously, it’s good, and it’s clear I hope now, that the team can truly say that they can rely on me in tough moments. And that, if we are in difficult moments in the race, I can be strong and do the job.”

Ocon added that another important factor for him last year was the security that came from having a multi-year contract, rather than needing to prove himself straight away to keep his seat.

“It was very important to be sure on your future, to be stable in your mind, and to know that you can build something with the team that you are driving for,” he explained.

“If you have limited time, it’s not good. You can’t have time to basically progress and work properly with the people around you.

“We’ve seen that, it’s not easy to switch teams, even for people that have been racing. And on top of that, I had a year off so I had to get back up to speed, and also learn to work with a new team.

“So I’m definitely aiming to do a bit like what Daniel [Ricciardo] did for his second year – which is step up and continue the progress that we have been doing this year.

“That is definitely the aim. So it was important to know your future and be stable in there.”

Revealed: What Ferrari is changing on its engine for F1 2021

Alfa Romeo wants "improving" Giovinazzi to be a team leader