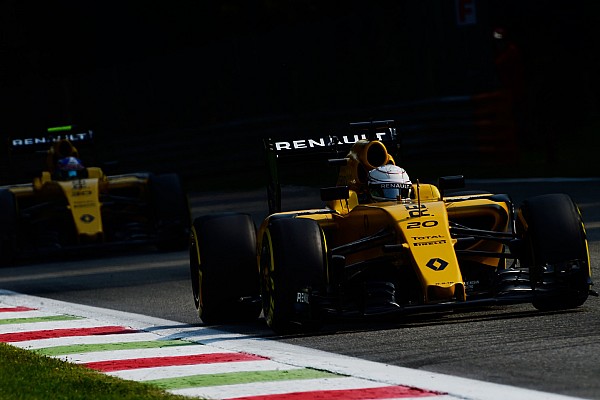 Renault is set to postpone a decision on its 2017 driver line-up, because it wants more time to better evaluate Formula 1’s rising stars.

The French car manufacturer had originally said it would take a decision this month about whether to retain Kevin Magnussen and Jolyon Palmer, or sign someone new.

It had been interested in both Sergio Perez and Stoffel Vandoorne for next year, but Perez is now expected to commit fully to Force India, while McLaren announced at the Italian Grand Prix that it was taking up an option on Vandoorne.

With Renault adamant that it wants to find a youngster that it can build its long-term future around, team principal Fred Vasseur says its situation is now more fluid – which is why the manufacturer wants more time to choose who it wants next year.

“There is no deadline, we can do it one week before [the test in] Barcelona next year,” Vasseur told Motorsport.com in an exclusive interview.

“For sure, we are probably more focused on young drivers than old ones or more experienced drivers, because we have a mid-term project. I would like to be able to find the drivers of 2020, not the one of 2010.

“And if you have a look at the junior [drivers], every single weekend the situation is moving and changing. If you look at the experienced ones, it is not changing, they have delivered in the past and you know exactly what they are able to do, and their skills.

“But if you look at the juniors, they are improving or not, they have a new opportunity or not – look at Esteban [Ocon] – and I think it makes sense for me to take time to decide.

Ocon is understood to remain a clear favourite to land one of the Renault race seats for next year, but who lines up alongside him is much less certain.

Although Magnussen and Palmer have not been completely ruled out, Renault knows that waiting will give it a better idea of who is available.

Toro Rosso’s Carlos Sainz has again been linked with the outfit despite an existing extension to his Red Bull deal, while Williams has not yet officially confirmed that it is taking up Valtteri Bottas’s contract for next season.

Vasseur made it clear that he wants drivers who had the ability to motivate the workforce – because that would help drive the team forward.

“The driver has to be a catalyst of the system, capable of motivating the guys,” he said. “Behind him he has 1000 guys on the chassis and engine.

“If a driver through motivation is able to extract a little bit more from everybody, then he will be a huge success. The more you move forward [up the ladder] in racing series, the more these skills are important.

“It is why I was immediately convinced in F3 that [Sebastian] Vettel would do the job because he was already in the position to do this in F3.

“To bring everybody around him, to convince everybody at the team and so on. For sure, in F1, you need to have this attitude.”

O’Ward excited by Formula 1 test but "heart's with IndyCar"